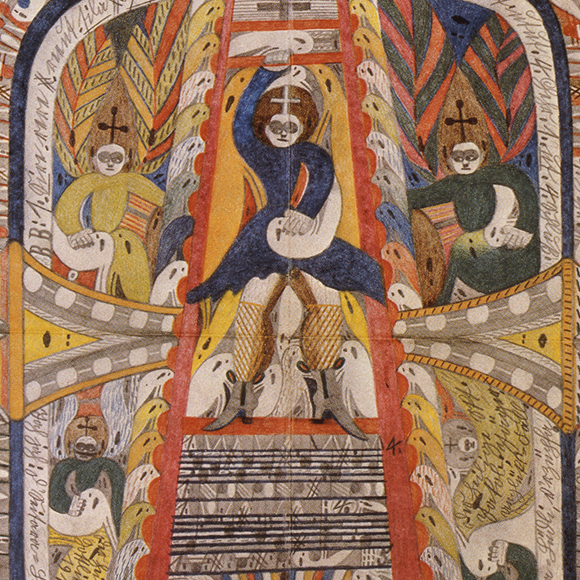 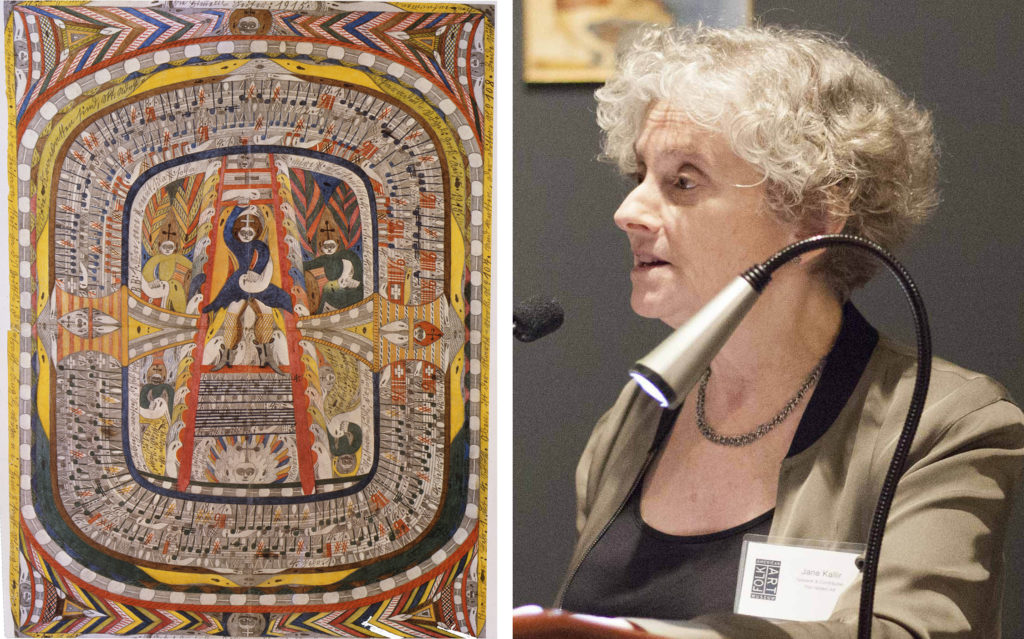 The following are closing remarks delivered by Galerie St. Etienne co-director Jane Kallir at the symposium “Post-Dubuffet: Self-Taught Art in the 21st Century,” held at the American Folk Art Museum on April 3, 2017. Video of the event may be found on Vimeo: morning session & afternoon session.

Our speakers have taken us on a remarkable journey this afternoon. We’ve seen how the field of “self-taught art” expanded from Hans Prinzhorn’s collection of work by mental patients to Dubuffet’s staking out of a broader “anti-cultural” position. We’ve gone from the field’s origins in Europe to the United States, and beyond that to Japan, India and other non-Western countries. Indeed, this field has today become so broadly inclusive that I wonder whether it can really be called a “field” at all. And if so, what are its defining characteristics?

Now, that’s hardly a new question. Some of us in this room have been arguing about terminology and definitions for close to 30 years. We’ve toggled back and forth among labels like “naïve,” “primitive,” “folk,” “self-taught,” “outsider” and “art brut”—none of which is adequate to describe all the works subsumed within our field, and some of which terms are hardly adequate at all. Over the course of these debates, I’ve repeatedly been drawn back to Arthur Danto’s concept of the “art world.” Danto, an art critic and philosopher, coined the phrase “art world” in 1964, because he wanted to distinguish between Andy Warhol’s Brillo boxes and the cartons found in supermarkets. Warhol’s creations, Danto said, differed from their virtually identical prototypes because Warhol was consciously engaged with the history of art and its attendant theories, and because this engagement was recognized as such by connoisseurs, curators and the other arbiters of taste who comprise the so-called “art world.” Even if Warhol had made no changes to the mass-produced Brillo box, the simple act of removing it from the supermarket and placing it in a museum would have been sufficient to transform the object into “art.”

In 1998, Danto was asked to contribute an essay to the Folk Art Museum’s catalogue, Self-Taught Artists of the 20th Century. Expanding upon his original thesis, Danto observed that, whereas members of the “art world” share a common grounding in art history and theory, the so-called “outsider” or art brut artist is incapable, for various reasons, of taking part in that discourse. Artistic training—or the lack thereof—is not the principal point. Danto compared Joseph Cornell to Henry Darger. Both were self-taught, but Cornell had an ongoing engagement with the art world, whereas Darger didn’t. Mental illness, per se, is also beside the point. And here I might compare the Prinzhorn artists with the highly successful contemporary artist Yayoi Kusama, who by choice has spent much of her adult life in a Tokyo psychiatric hospital. What we are talking about, then, is art that is created outside the institutional and historical framework of the art world.

Prior to the advent of modernism, members of the art world had no interest in objects created outside their purview. Danto ascribes the change in attitude to the demise of pictorial realism and the consequent search for new forms of visual expression. But I think there was more to it than that. The early modernists rejected not just realistic verisimilitude, but bourgeois social mores and the soul-deadening impact of industrial capitalism. You see these feelings carried forward in Dubuffet’s disdain for the marketplace, modern civilization and what he called “received culture.” Starting with the “discovery” of Henri Rousseau by Picasso’s circle in early 20th century Paris, there has been a tendency for the art world to project onto its “outsiders” a putative innocence and ignorance that hark back to the Romantic ideal of the “noble savage.”

By definition, members of the art world control the dominant narrative, and over the course of the past century they have selectively admitted into their midst non-member artists who furthered their agenda. The non-members’ original cultural contexts were routinely ignored, as were factors, such as artistic influences and stylistic development, that undercut the myth of purity and isolation. Just as the art world could transform a Brillo box into art, the re-contextualization of work by “outsiders” often turned it into something it was never meant to be. The white-cube gallery setting, dramatic spotlighting and elegant frames frequently obscured the artist’s original intentions.

All the power remained with the art world. The power to choose is the power to evaluate and ultimately the power to place a financial value on the object. “Outsiders” still lag far behind in the financial race, even compared to similar outliers such as Cornell and Kusama, who have been embraced by the art world as equals.   The “outsiders,” being separate, are never equal. What all those many labels—“self-taught,” “art but,” “folk,” etcetera—really signify is inequality. “Real” art, as Danto says, is “sans-phrase.”

Now I suppose at any given time there will always be a mainstream. There will be those who have the power to choose, those who get chosen, and those who get left out. The dominant discourse is constantly changing; it has the capacity to self-correct. Arguably, we are in such a period of correction now. Arthur Danto’s art world wasn’t really an art world. The operative theoretical and institutional networks were decidedly Eurocentric, and the chief participants were white men. Danto’s baseline was modernism, which was notable not just for the many, many types of art it ignored, but for the way it used and abused those aspects of alien culture (both domestic and foreign) that it chose to assimilate. Modernism had an extremely ambivalent relationship with the “other,” and that ambivalence continues to shape the way we view self-taught artists.

This field—our field—which still has no adequate, commonly accepted name—has always been defined in the negative. It’s what got left out, it’s the work created by those outside the art world’s discourse, by those who were too poor or too uneducated or too ill to fully participate. But as modernism fades into history, as Western hegemony falters, the notion of a singular, all-decisive art world no longer makes much sense. In an increasingly pluralistic, decentralized world—a truly global world—it should be possible to view this work simply as art. And then it won’t matter that it never had a name.