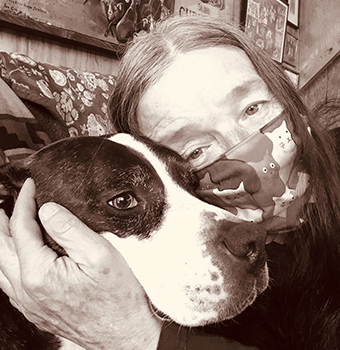 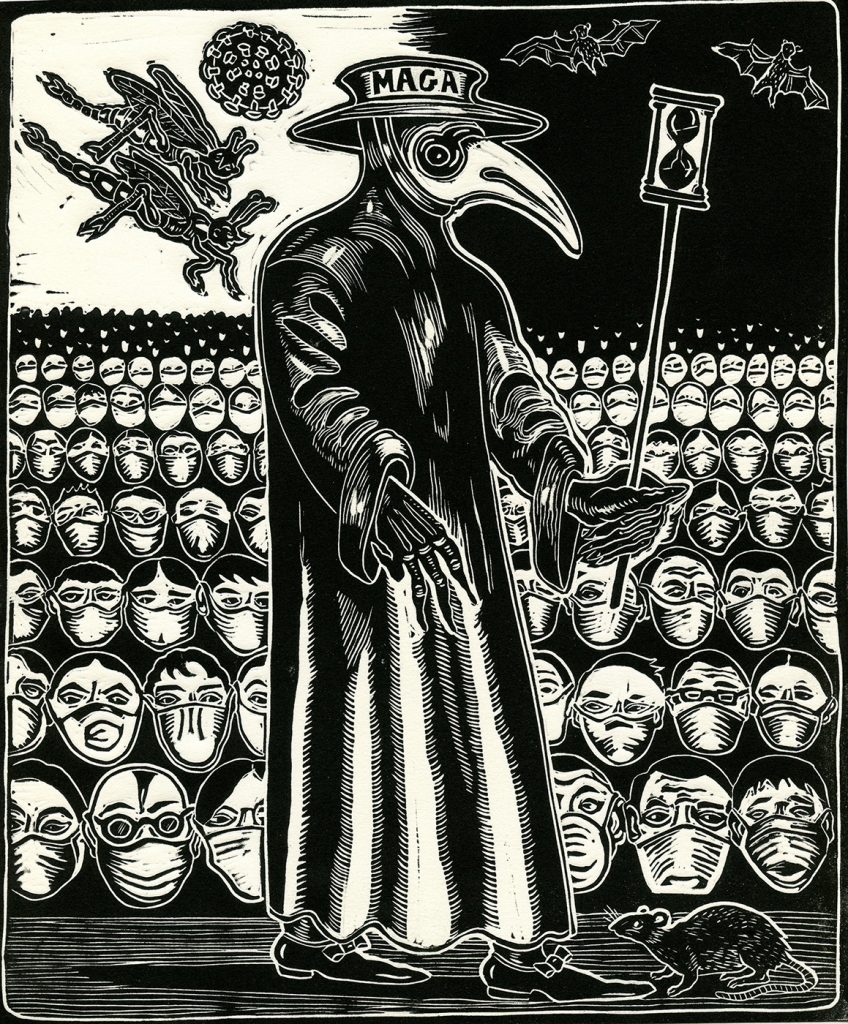 A self-described artist-activist, Sue Coe is not one to shy away from the difficult. For decades, the British-American artist has dedicated herself to shedding light on injustice, highlighting topics ranging from past pandemics to political, animal and environmental cruelties. While sometimes tough to look at, her work compels its viewers to feel compassion for the world’s many unseen victims and to enact change in our broken capitalistic system.

Working from her home in upstate New York, Coe spoke with Associate Director Fay Duftler over email about how she’s faring during lockdown. Below is the transcript, which has been edited for length and clarity.

Fay Duftler: For decades your work has centered on animal abuse and exploitation; you’ve done series of works that deal with AIDS, Ebola, avian flu and swine flu. Are you surprised by the onset of the current pandemic?

Sue Coe: No. In 2011, Judith Brody and I wrote a book that warned about zoonotic viruses, Cruel. But studying the science is very different from the immense sadness caused by the current loss of life.

I can only fathom this by making art. It organizes my thoughts, fitting the puzzle pieces together. Art is the canary in the coal mine. She can’t keep singing forever.

FD: Tell us about these wet markets that are rumored to be the cause of the novel coronavirus.

SC: Wet markets are a locus of zoonotic viruses, but this view is usually draped in a degree of xenophobia. Social media is glutted with conspiracy theories about Wuhan, spawned by hard-right websites and cycled back around, to dupe and divert the masses.

Bats are carriers of many viruses.  They have fierce immune systems because they burn up so much energy. They pollinate plants and eat insects. Bats are integral to healthy ecosystems, their droppings fall to the forest floor where pangolins also forage for insects, thus the connection. But it seems increasingly unlikely that pangolins were the direct source of COVID-19. The Wuhan wet market was mainly selling oceanic creatures and chickens.

There are more than 60 wet markets in the NYC area. These don’t include wildlife, but the more typical victims of human appetites: lambs, goats, chickens, ducks.  Blaming the Chinese disguises our own complicity in consuming animal products.

Wet markets have only become a concern to some formerly indifferent humans, because they are more visible than slaughterhouses. The only way forward is to convince others to not eat animals.  Implementing plant-based nutrition, as soon as possible, is a critical role for responsible governments in terms of global warming and preventing pandemics. This will happen, this has to happen.

Globally, 99% of all energy calories are lost in the agricultural production of 1 calorie of animal meat. This is an immoral waste. Destruction of forests, destruction of indigenous populations and wildlife, the use of fossil fuel, air pollution, loss of topsoil from grazing, and crops saturated with chemicals for animal feed, dangerous use of pharmaceuticals, waste of potable water… It is literal insanity. Is human gastronomical pleasure worth this level of cruelty, loss of life and the environment? To the industries that profit, yes.

FD: How are you holding up in isolation? Has your routine changed in any way?

SC: I hold up by making art about COVID-19 and that other scourge, Trump. Both are transient blights, but the threat of fascism and emerging viruses and pathogens will always be with us.

FD: You count scientists, nurses, doctors and intellectuals as close friends, and I assume you’ve kept up with them via email. What are their thoughts on the pandemic?

SC: Their thinking veers between “we are fucked” to “we are so doomed”. By comparison, I feel like Pollyanna. It’s refreshing. I feel braced. I’ve always been the one who predicted we were doomed, that capitalism would become increasingly deadly in its end phase.  Now I have to embrace a cheery disposition to counter their depression. I can summon a false humanism, without bursting out laughing; and possibly also summon something of a spiritual nature.

I have friends who are brave and brilliant and ethical, but they are exhausted and despairing after years of Trump. We keep each other going. No complaints. Being trapped in a refugee camp on the border is far, far worse.

FD: A recent artist-in-residence visit to Chicago was cancelled because of the quarantine, and your internet service, being in a rural area, was not sufficient to allow you to do an online chat. Do you think this discrepancy is indicative of general accessibility issues in rural areas, which puts the people who live there at a natural disadvantage? Many schools are going to online learning, but kids and teachers in rural areas might not be able to use that technology. Thoughts?

SC: We don’t even have a cell phone signal up here, so we pay a fortune for internet and a land line; there is no ‘competition’. The poor always pay the most, this we know. Those who exist in a permanent office environment don’t comprehend that many Americans don’t even have running water, let alone running mobile phones. It’s not only rural areas; working-class people in cities cannot afford broadband. Vast swaths of America are a third-world country dressed up in a first-world frock.

FD: How do you think President Trump is handling the crisis? Cuomo?

SC: One of my friends said he had to consult his old psychiatry textbook to diagnose Trump after his latest presser, but said he couldn’t, because there was no chapter on evil. It’s impossible to debate Trump because everything is mediated through the Murdoch vomitus of vile talking heads. Government has been hollowed out of all competent responsible voices thanks to hard-right deregulation.

Cuomo—I am grateful we live in a blue state, with decent politicians who believe in public service and helping others.  See! That’s my new Pollyanna persona coming to the fore.