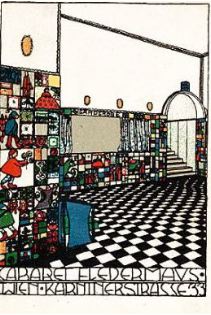 The Wiener Werkstätte (Vienna Workshop) was founded in 1903 by the architect Josef Hoffmann and the artist and designer Koloman Moser, with financial backing from Fritz Wärndorfer, a textile industrialist. Not bound by any one stylistic scheme, and inspired by the British Arts and Crafts movement, the Werkstätte encompassed a wide range of media: graphic arts, furniture, ceramics and glass, silver, fashion and textiles, bookbinding, toys, and more. Its collaborators (among them Gustav Klimt, Oskar Kokoschka, and Egon Schiele) pursued the ideal of the Gesamtkunstwerk, or “total artwork”—artists and craftsmen of various disciplines collectively designing complete environments.

The Werkstätte’s professed desires to directly connect artisans and consumers, and to produce “good, simple domestic requisites” notwithstanding, its production and clientele were quite rarefied. The collective’s failure to adopt mass-production techniques made its work unaffordable for most, and its credo and designs appealed primarily to wealthy and urbane patrons of the arts. The venture, while central to the artistic and cultural flowering of turn-of-the-century Vienna, was never self-sustaining.

Under the patronage of first Wärndorfer, and later, of the banker and industrialist Otto Primavesi, the Wiener Werkstätte remained active in different forms for close to thirty years, until 1932, with retail outlets in Zurich, Berlin, and New York at different times in its history. Its far-reaching influence extends from Germany’s Bauhaus (1919-1933) to the work of contemporary American architects such as Charles Gwathmey and Richard Meier.

While still in Vienna, Otto Kallir attended to Wiener Werkstätte’s “liquidation sale” in 1932, and after emigrating to the United States, he befriended the wife of Josef Urban, who had run the Wiener Werkstätte’s New York Branch. This connection enabled the Galerie St. Etienne to mount a cooperative Wiener Werkstätte exhibition in 1966. A second, far larger presentation accompanied by a book-length catalogue, followed in 1986, at the time of MoMA’s celebrated Vienna 1900 show.