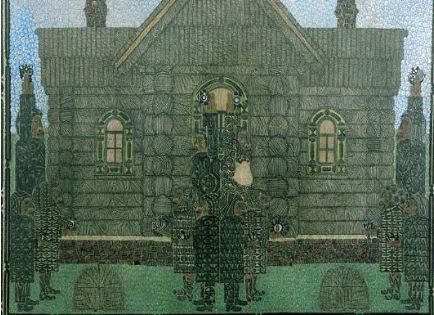 Vasilij Romanenkov was born in 1953 in the isolated village of Bogdanovka, USSR. As a teenager, he moved to live with relatives near Moscow, where he trained as a cabinetmaker and worked on construction sites. He started painting at the age of twenty-two, and for several years attended classes with the artist Rotanov. Romanenkov’s pencil drawings—sometimes tinged with colored ink, always framed by rich borders—are complex representations of closely-knit, rural communities.

Having been transplanted to the city at an early age, Romanenkov idealized the countryside he left behind. His love for the village is apparent in even the tiniest details of his works. Themes include haymaking, births, marriages and funerals; many of these scenes take place against a background of churches and wooden houses. Romanenkov’s images, reminiscent of Russian icons, are heavily laden with both secular and religious symbols and spiritual overtones. Referring to a series of late works called The Town Life, the artist described the symbols on the figures’ clothing as the “dreams of peasants who have to work in the town.”

The Galerie St. Etienne introduced Romanenkov to the United States in a show of European self-taught artists in 2000.