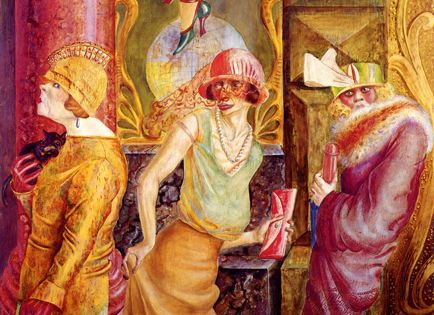 Otto Dix is considered one of the most important German artists of the Weimar era (together with Max Beckmann and George Grosz), not least for his etching cycle War—a seminal anti-war statement. Focusing on war cripples, sex workers, sexual deviants, and the vices of the German ruling class, Dix’s work is an indictment not just of World War I but also of social and political corruption in the Weimar Republic.

In 1914, following several years at the School of Applied Arts in Dresden, Dix volunteered for military service and was assigned to command a machine-gun unit on the Western Front. He served for the duration of World War I, fighting on both fronts. Like so many of his compatriots, he was profoundly traumatized by combat. His wartime experiences fueled his attacks on militaristic bourgeois society, and by the 1920s, Dix had become a vociferous social critic. He exhibited at the First International Dada Fair, was a founding member of the Dresdner Sezession-Gruppe 19, and was also affiliated the Novembergruppe, the InternationaleArbeiterhilfe, the Rote Gruppe and Nie Wieder Krieg (Never Again War), a pacifist group to which Käthe Kollwitz also belonged.

In 1923 Dix was charged with disseminating pornography for his painting Girl in Front of a Mirror; his trial ended in acquittal. From 1925 through the end of that decade, he grew more successful, but by the 1930s, the National Socialist Party was targeting him as “subversive.” Perhaps unsurprisingly, Dix was forced to resign from his professorship at the Dresden Academy almost as soon as Hitler came to power, in March 1933. More negative attention followed that autumn, when War Cripples was exhibited in “Images of Decadence in Art.” By 1934, Dix was forbidden to paint in Germany, and in 1936, he relocated to Switzerland, where he limited his subject matter to innocuous landscapes. In 1938 he participated in a protest exhibition organized by London’s New Burlington Gallery in response to the Nazis’ “Degenerate Art” show (which had included some of his works).

Dix returned permanently to his home country after peace was declared. He died in 1969.