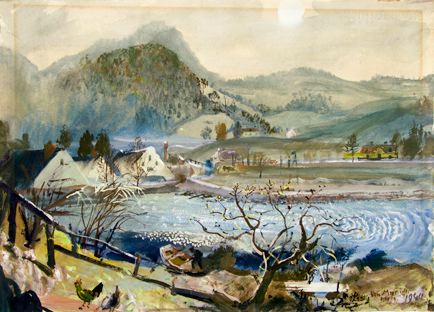 Oskar Laske was born on January 8, 1874 in Czernowitz (part of the Austro-Hungarian Empire; now in Ukraine). Named after his father, an architect, Oskar Jr. was expected to share the same profession. Around age 13, he moved to Vienna, and soon after began taking art lessons from the Hungarian-born painter Anton Hlavacek. At age 18, Laske began six years of study at the Technische Hochschule, one of the leading Central European training grounds for architects and designers. He completed his training under the directorship of Otto Wagner at the Vienna Academy.

One of Laske’s commissions, completed shortly after graduation, the Apotheke zum weißen Engel (Apothecary of the White Angel), still stands in Vienna today. Executed from 1901-1902, the graceful building is most notable for its marble façade and the two angel mosaics flanking the entrance–a perfect encapsulation of Jugendstil’s stylized beauty.

Soon enough, though, Laske had shifted his attention to fine art. Printmaking dominated his artistic practice for years after the publication of his first etching in 1904. As a military painter during the First World War, Laske depicted battles and operations in the Alps and in Eastern Europe. The artist’s non-military works from this period consist mostly of landscapes, views of city squares, and genre scenes, informed by his travels in Europe and North Africa. These works (particularly the quiet and colorful vistas of Austria’s lakes region) are stylistically indebted to Hlavacek. Also evident is Laske’s admiration for Peter Bruegel and (especially) James Ensor.

After World War I, Laske worked mainly in watercolor and oil. He died in Vienna in 1951 at the age of 77. He was recognized by the Austrian government both during his lifetime and posthumously, including the renaming of a street in Wien-Meidling and an alley in Neulengbach in his honor.

In 1921, Otto Kallir published a catalogue raisonné of Laske’s prints from 1904 to 1921, and thereafter the artist was represented by the Neue Galerie. The Galerie St. Etienne mounted his first American one-person show in 1950, the year before his death.