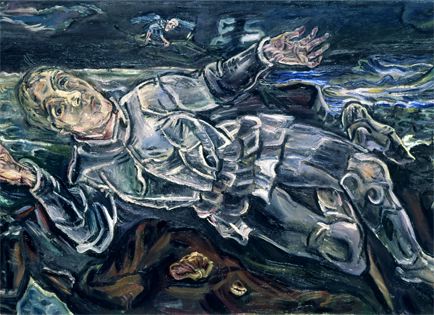 Oskar Kokoschka was still a student at the School of Applied Arts in Vienna when a children’s book rocketed him to the forefront of the city’s avant-garde. His illustrations for that book, Die träumenden Knaben (The Dreaming Youths) were executed in the bright, decorative style then in vogue at the Wiener Werkstätte. Kokoschka’s text, however—a bizarre, proto-Expressionistic prose poem—revealed a markedly different approach. Kokoschka’s concurrent participation in the 1908 Kunstschau cemented his reputation as a provocateur and brought him into the orbit of the iconoclastic architect Adolf Loos. It was through Loos that Kokoschka secured his first portrait commissions.

Between 1910 and the First World War, Kokoschka lived briefly in Berlin (where he was on the staff of the avant-garde periodical Der Sturm), and exhibited in both Germany and Austria. Publication of his drawings and writings, including the sensational 1909 drama “Mörder, Hoffnung der Frauen” (Murderer, Hope of Women), increased his renown (as well as his “wild” reputation). During these years, too, Kokoschka pursued an ultimately painful romance with Alma Mahler. Their relationship was Oskar’s first serious sustained passion, but Alma, the recent widow of composer Gustav Mahler and one of Vienna’s fabled femmes fatales, from the start preserved her distance. She insisted on keeping the affair secret, and devastated the young artist with her decision to abort their unborn child rather than marry.

Soon after, Kokoschka enlisted in the cavalry, serving two tours of duty despite being seriously wounded at the Russian front in 1915. Once discharged, Kokoschka suffered from severe shell shock. He sought medical treatment in Germany in 1916, and settled in Dresden.

By 1920, Kokoschka had experienced a decade of intermittent exposure to German Expressionism, and he proved adept at absorbing the congenial aspects of the style. In Dresden, he became a brilliant colorist as he embraced the bright, fauvistic hues so popular among many German Expressionists before the war.

Driven from Dresden by the instability of the Weimar Republic, Kokoschka relocated to Prague in 1934. His work was branded “degenerate” and featured prominently in the 1937 Nazi exhibition of that name. When Hitler’s 1938 invasion of Austria compromised Czechoslovakia’s future, Kokoschka emigrated to England with Olda Palkovská, a young Czech law student whom he married in 1941.

After World War II, Kokoschka and his wife settled in Villeneuve, Switzerland. Kokoschka again rose to prominence in postwar Germany, where a generation of politicians eager to disassociate themselves from the Nazi past was keen to commission portraits by a “degenerate” artist. In Salzburg, Austria, he established the “School of Seeing” in 1953. Kokoschka died in 1980, a week shy of his 94th birthday.

The Neue Galerie was Kokoschka’s exclusive Austrian representative between the two world wars, and in 1926, Otto Kallir published a drama by Oskar’s brother, Bohuslav, illustrated with two etchings by the artist. In the United States, Kallir facilitated museum acquisitions of many important Kokoschka paintings. The Knight Errant, which hung in the Kallirs’ Vienna apartment, is today in the Guggenheim.