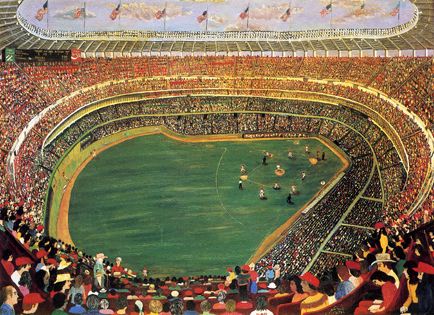 Nan Phelps was one of eleven children born to an impoverished family near London, Kentucky. Although she began to draw with crayons in school, her education was curtailed when her family’s economic situation compelled her to drop out after eighth grade to care for her brothers and sisters. After a three-year marriage to a cruel man who had forced her to marry him, Phelps escaped with her two children to Hamilton, Ohio, where she met her second husband, Bob Phelps, whom she married in 1929.

In the 1930s, Phelps took a two-year correspondence course in design and then began painting in earnest, purchasing her first oil paints from a Sears & Roebuck catalogue. Her first documented picture, The Lone Stroll of 1932, was rejected for exhibition by the Cincinnati Art Museum because its authenticity was doubted. The museum sent her to the Cincinnati Art Academy to test her abilities and, after six months, satisfied that her talent was genuine, consented to exhibit three of her paintings. When, in the 1940s, self-taught painters began to receive national publicity, she sought the advice of Dorothy Miller at the Museum of Modern Art. Miller referred her to the Galerie St. Etienne, which was by then well known for its involvement with Grandma Moses. Phelps has exhibited her work at several New York galleries in addition to the Galerie St. Etienne. Her work has also been widely shown in Japan and is included in several public collections, among them the Cincinnati Art Museum and the Museum of American Folk Art, New York. She is featured in the book The Folk Art Tradition (1982).