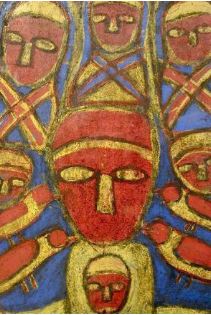 Michel Nedjar was born in the suburbs of Paris in 1947. Entirely self-taught as an artist (though also an accomplished filmmaker), he grapples with the generational trauma of the Holocaust, seeking a means to recuperate the past and communicate with the dead through two-dimensional and sculptural works. His imagery references ancient and tribal sources; for Nedjar, the found object carries a spiritual potency, salvaging materials that would otherwise be lost or destroyed.

It is no coincidence that Nedjar’s dolls and some of the figures in his paintings evoke the faceless bodies one sees in photographs of Nazi concentration camps. These shattering images, which Nedjar first encountered as a teenager in Alain Resnais’s Night and Fog, had a profound effect on the artist, a Jew whose parents were among the few family members to survive the Holocaust. Haunted by his family’s history, Nedjar was forced into an even closer personal encounter with death when he contracted tuberculosis while serving his obligatory stint in the French army. This experience prompted him to abandon an incipient career as a tailor and fashion designer and embark on a lengthy journey to such far-flung places as India, North Africa and Mexico. In Mexico, he was especially moved by the ceremonial figures used to celebrate the Day of the Dead and by the attendant proposition that highly charged inanimate objects can be a means to connect with the spirit world. If Nedjar’s dolls may be seen as literal, three-dimensional spiritual totems, his paintings further the same objectives in more symbolic, two-dimensional terms. His shadow figures and almost featureless masks are a way of transcending individual identity and contacting the sacred presence beyond.

In 1982 Nedjar and Madeleine Lommel cofounded the Collection de l’Aracine, today housed at the Lille Métropole Musée de l’Art Moderne (LAM). The artist was given a retrospective at the LAM in 2017, and his work is included in Jean Dubuffet’s Musée de l’Art Brut. Nedjar lives and works in Paris.

The Galerie St. Etienne represented Nedjar for twenty-two years beginning in the late 1990s, and included him in numerous exhibitions during this period.