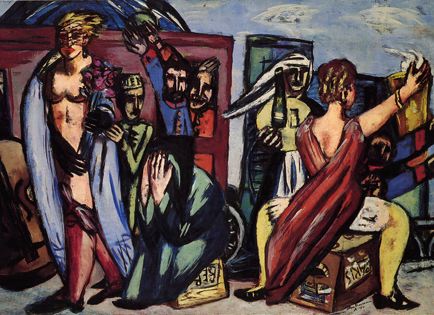 Max Beckmann is generally considered the greatest of the second-generation Expressionists, who came of age in the period between the two world wars. Many of these artists served in World War I, and the lingering trauma of combat played out in their embrace of Dada, political satire and Neue Sachlichkeit. Though Beckmann, too, bore the emotional scars of the war, he remained truer to the tactile brushwork and expressive palette of the earlier Expressionists than did many in his artistic cohort. His oeuvre encompasses a broad array of subject matter: conventional portraits and still lifes, social commentary and monumental (often arcane) allegories.

Beckmann began his formal artistic training at the Weimar Art School at age sixteen, and went on to study in Paris and Florence before returning to Berlin. In 1910 he became the youngest member of the Berlin Secession’s governing body. By 1913 the first monograph of his work had been published, and Galerie Paul Cassirer had mounted his first solo show.

About six months after his 1915 enlistment as a medical orderly in the German army, Beckmann suffered a nervous breakdown. Thereafter, his romantic technique of the prewar years gave way to flatter colors and angular forms. His new works were first shown in 1919, to an exceptionally positive reception. He reached the height of his popularity between 1924 and 1930. During this time he took a post as a master teacher at Frankfurt’s Städelschule, and saw an entire room dedicated to his work in Berlin’s Kronprinzenpalais. In 1930, he was chosen to represent Germany at the Venice Biennale.

Beckmann was dismissed from the Städelschule and vilified by the Nazis as soon as Hitler came to power in 1933. His works hung in the first room of the “Degenerate Art” exhibition in 1937. The day of the show’s opening, the artist and his wife fled to Amsterdam, where they lived out the war. In 1947, Beckmann immigrated to the United States and took teaching positions first in St. Louis, and then in Brooklyn. The artist remained prolific in exile, chronicling his experience of displacement. He died of a heart attack in 1950.

Otto Kallir published Ebbi, a suite of size etchings by Beckmann, in 1924, and the following year, he mounted a one-man exhibition devoted to the artist at the Neue Galerie in Vienna. Fanny Kallir, Otto’s wife, was a close friend of Beckmann’s second wife, Quappi. The two couples remained in touch after they resettled in New York.