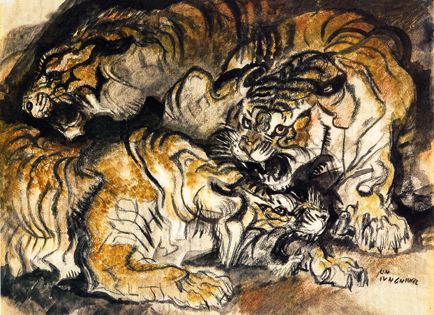 Since Ludwig Heinrich Jungnickel was given to secrecy, many details of his life remain unknown. He acquired his artistic training at Munich’s Kunstgewerbeschule (School of Applied Arts), the Vienna Academy of Fine Arts under Christian Griepenkerl, and briefly, at the Vienna Kunstgewerbeschule. Jungnickel exhibited at the 1908 Kunstschau (Art Show) in Vienna. That same year, he was awarded an important commission for a wall frieze in the children’s room at the Palais Stoclet in Brussels—a comprehensive environment designed and constructed by the Wiener Werkstätte between 1905 and 1911. Following his involvement with the Stoclet project, Jungnickel remained active in the Wiener Werkstätte as a designer of wallpaper and postcards.

In 1911, Jungnickel’s 1909 series of ten color woodcuts of animals earned a prize at the “International Art Exhibition” in Rome. That same year, the artist accepted a professorship at Frankfurt’s Kunstgewerbeschule, a position he would hold for barely twelve months. From 1917 to 1922, he published several print cycles. Influenced by Oskar Kokoschka and Egon Schiele, Jungnickel for a time experimented with figural work, but the better part of his oeuvre depicts animal subjects. “Through animals one sees deep, because they are the highest form of nature, mankind included,” he wrote in 1926. “For us, the animal is the bridge to greater nature.”

In 1939, after the Nazis branded his art “degenerate,” Jungnickel emigrated to Yugoslavia. He finally returned to Austria in 1952, where he remained until his death in 1965.

Otto Kallir’s Verlag Neuer Graphik published Jungnickel’s Italian Sketchbook in 1922, and the artist was subsequently represented by the Neue Galerie in Vienna.