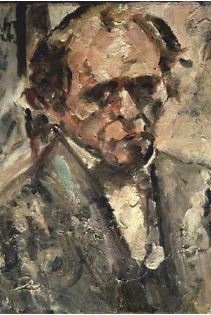 Lovis Corinth had his feet in two worlds, bridging the 19th and 20th centuries. He began as a fairly conventional (and highly successful) academic painter but lived to participate in the birth of Expressionism. In his bold handling of his paint and, above all, his intensely personal approach to his subjects, Corinth is one of the most important precursors and pioneers of German modernism. Though revered in his native Germany, Corinth remains less known internationally.

Corinth was born in 1858 in the East Prussian town of Tapiau. An indifferent student, in 1876 he convinced his father to let him leave high school for the Königsberg Art Academy, where began some eleven years of peripatetic artistic training. Corinth would travel to Munich, Antwerp, Paris and back again, finally, to Munich and Königsberg. At the Académie Julian in Paris, Corinth was granted admission to the prestigious Salon, but because of nationalistic hostility from his French competitors, was denied the “honorable mention” he coveted. Over the ensuing years, he garnered a small share of favorable reviews and awards (even, in 1890, an “honorable mention” in Paris), but he lived off the income from his family’s property. Only in 1895, at the age of thirty-eight, did he sell his first painting.

Like many artists of his time, Corinth eventually came to earn a good living from his portraits, though his schooling and subsequent professional experiences, had taught him to place a higher value on elaborate figural compositions depicting traditional religious, historical and literary themes. Indeed, it was with such works that he gradually developed his reputation, first in Munich and then in Berlin, where he moved in 1901 to seek his fortune with the recently founded Secession. In late 1911, at the age of 53, Corinth suffered a serious stroke left him partially paralyzed on his left side. Once recovered, his painting style had changed utterly and, as it happened, permanently, becoming looser and much more Expressionistic. Corinth died of pneumonia in 1925.

Corinth’s wife, the artist Charlotte Berend, was Jewish, and emigrated to the United States in 1933. By 1948, she and the couple’s two children were living in New York. In 1943, Berend-Corinth contributed works to a major Corinth exhibition at Galerie St. Etienne, and the gallery continued to work with the artist’s family for the rest of their lives.