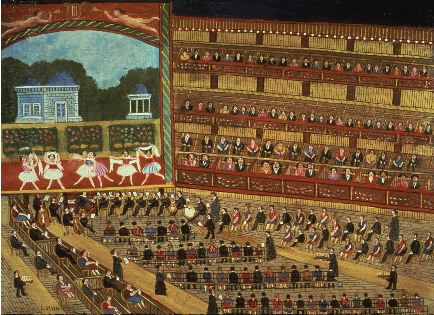 Louis Vivin’s first paintings depicted landscapes in and around his birthplace of Hadol, France. As a longtime employee of the postal service (from 1879 to 1922) the artist traveled frequently, and attained the rank of inspector. He was awarded the Ordre des Palmes Académiques for an unpublished series of maps of French postal districts.

In 1889 Vivin and his wife moved to Paris, taking up residence in Montparnasse. During his visits to Luxembourg galleries and the Louvre, the artist was impressed by the work of Camille Corot and Gustav Courbet, and particularly, by Ernest Meissonier’s sense of detail. Vivin’s earlier work is generally active in mood and narrative in content, while his later works are more static, emphasizing form and blocks of color. He showed one painting, Pink Flamingo, at an 1889 exhibition of pictures by postal clerks, and after 1925 his works appeared in Paris galleries through the support of the German art historian and dealer Wilhelm Uhde.

Along with André Bauchant, Camille Bombois, Séraphine Louis and Henri Rousseau, Vivin is considered one of the artists of the “Sacred Heart” group: the most important self-taught artists of early-20th-century France.