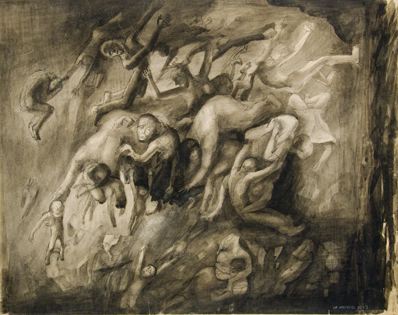 Lea Langer was born in Dresden and raised as an Orthodox Jew. Finding the Orthodox environment stifling, she began several years of art studies in 1922, first at the Academy of Arts and Crafts and then at the Academy of Art. She was much impressed by the works of Ernst Barlach and Oskar Kokoschka, while Otto Dix’s War cycle reinforced her deeply pacifist convictions. Around 1924, she met the artist Hans Grundig, and in 1926, both joined the Communist Party. Langer’s father strongly opposed her political views and her association with Grundig. He sent her to a sanitarium in Heidelberg, and when Hans joined her there, she was shipped to Vienna. Hans again followed, and in 1928 the couple married. From that time on, they lived among their proletarian friends in one of Dresden’s poor housing units, eking out a meager living. In 1930, the Grundigs and others in their circle joined the newly-formed local branch of the Communist “Asso” (Association of German Revolutionary Artists).

Lea Grundig preferred paper to canvas, working mostly in blacks and grays. She portrayed her subjects in a social and psychological context that reflected the misery and hardship of the working poor. During the early Nazi years, she created a series of etching cycles depicting “the thousand fears, the presentiment of doom, the imprisonment of the persecuted, the inhumanity and the fight against it by the best of mankind.” Printed and circulated in secret, the etchings were intended to provoke resistance to Hitler.

Starting in 1936, both Grundigs were in and out of concentration camps as a result of their past Communist affiliations and ongoing anti-Nazi activities. Lea managed to emigrate to Palestine, but Hans was incarcerated for the duration of the Nazi period. Lea rejoined her husband in Dresden after the war. Despite her unwavering Communist sympathies, Lea struggled under the repressive East German regime. Toward the end of her life, however, she was showered with official honors.

The Galerie St. Etienne began exhibiting Grundig’s work in the 1990s, in connection with a never-realized museum project on female Expressionists.