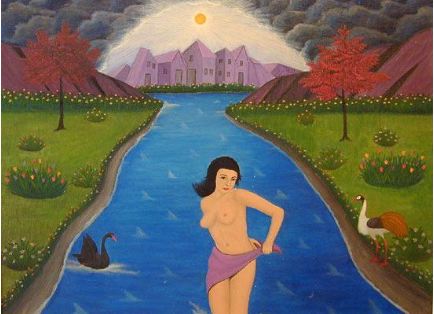 Lawrence Lebduska was born in Baltimore, Maryland, where his German father was on an assignment for the stained-glass firm Flieder & Schneider. When he was five, Lebduska returned with his parents to their native city of Leipzig, where he eventually studied the craft of stained glass at a technical and chemical school run by his father’s company. Though Lebduska lacked any formal art education, he gained knowledge of color from working with glass and began to paint. After winning a prize at an international art exhibition, he went on to study decorating under the tutelage of Joseph Svoboda in Chrudim, Bohemia.

Lebduska returned to Baltimore in 1912, and moved to New York the following year. Here he painted murals for the noted interior designer Elsie de Wolfe and made stained glass decorations for various private homes. All the while, Lebduska submitted his paintings to group shows around the city. At one such exhibition, his work was seen by a representative from the Contemporary Gallery, who in 1936 offered him his first one-man show. It is said that this solo show–a virtual sell-out–inspired Abby Aldrich Rockefeller to begin her legendary folk art collection.

Lebduska later participated in the WPA’s Art Project in New York and was exhibited by the Babcock, Valentine and Kleeman Galleries during the late thirties and early forties. Although he fell seriously ill in the late 1950s, he resumed painting and had a small exhibition at the Tutti Gallery in 1962. His work is in the collections of the Museum of Modern Art, the Albright-Knox Art Gallery in Buffalo, and the University of Arizona, among others.