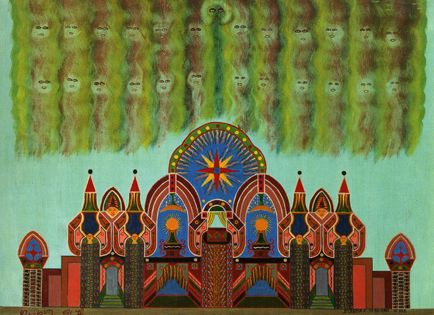 While in his sixties, Joseph Crépin, who owned a welling and drilling business in Pas de Calais, discovered that he possessed powers as a divine healer. At roughly the same time, in 1938, he began to create small drawings while in a trance-like state. The following year, a mysterious voice told him to produce three hundred paintings, the completion of which would guarantee the end of World War II. His paintings are all rigid, flat, symmetrical designs, covered with glistening beads of paint. While creating these works, Crépin believed he derived psychic and artistic strength from a ritualistic contemplation of the sun. Crépin felt that just as the entire set of paintings would lead to peace, individual works would give their owners power and safety. He claimed to have finished the very last of these pieces on May 7, 1945, the day of Nazi Germany’s surrender. Soon after, the same voice told him that an additional forty-five paintings would ensure world peace forever. Unfortunately, of those paintings, only forty-three were completed by his death in 1948.