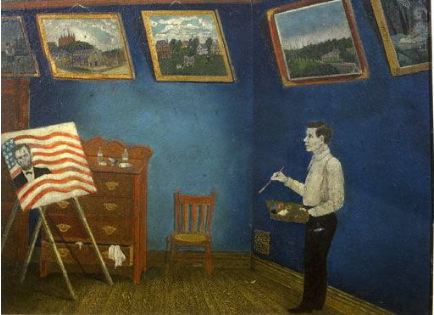 John Kane was born in Scotland in 1860, one of seven children of impoverished Irish parents. He crossed the Atlantic at age nineteen and made his way to Pennsylvania. Buffeted from one job to the next, he roamed Pittsburgh and its surroundings, also traveling to Kentucky, Alabama, and Tennessee. Though Kane was able to handle the most grueling factory work and even to hold his own in the boxing ring, his time as an itinerant “brawnyman” came to an end late one night in the Baltimore and Ohio Railroad yards. As he and his companions cut across the tracks, they were surprised by an unlit train. Kane pushed his cousin to safety but lost a leg. He was thirty-one years old.

Kane married in 1897, and by the following year had an infant daughter (a second followed in 1901). He was hired as a railroad watchman, and eventually, to paint railroad cars. He spent his lunch breaks covering the sides of bare boxcars with pictures of his own devising–which his foreman permitted, provided he painted over these images once work resumed. From this first encounter with paint, Kane learned techniques he never abandoned. When business slowed and Kane was laid off, he put his new knowledge to practical use. He went door to door, offering to enlarge photographs and color them in paint or pastel. In the artist’s telling, these photo-paintings sold better than the larger, entirely original canvases he produced later.

In 1904, Kane’s wife gave birth to a son, who succumbed to typhoid fever after only a day. The devastated artist began drinking heavily and abandoned his wife and children, drifting through Pennsylvania, Ohio, and West Virginia. During those long and dreary years, Kane continually tried to find a place in his life for art. He executed unsolicited “portraits” of local houses on scraps of beaver board, and then endeavored to sell them to the residents. As he had done all his life, he learned through trial and error. He sketched figures in railroad stations, and on park benches and streetcars. He also spent hours in the library copying pictures from illustrated art books. Though he humbly acknowledged that academically trained artists had an advantage over him, his self-made accomplishments were a source of pride.

After two unsuccessful submissions to the Carnegie International exhibition, Kane won over the jury in 1927, at age sixty-seven. The admission of a common housepainter and handyman to so prestigious an exhibition caused an immediate furor. Indeed, it was the first time that a living self-taught artist had been recognized by the American art establishment.

The Galerie St. Etienne took over representation of the estate of John Kane in 1983, and in 1984 mounted a major loan exhibition of paintings and sketches commemorating the fiftieth anniversary of the artist’s death. The show traveled to six additional venues between 1985 and 1986: The Carnegie Museum of Art, Pittsburgh; Yolanda Fine Arts, Chicago; The Albany Museum of Art, Albany, GA; Lowe Art Museum, Coral Gables, FL; Flint Institute of Arts, Flint, MI; and The William Benton Museum of Art, Storrs, CT.