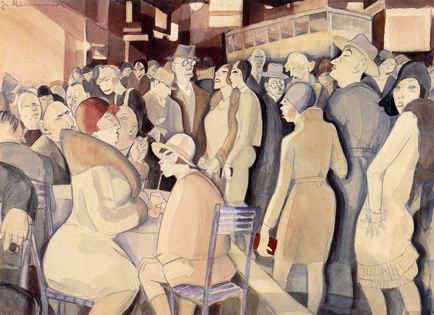 Jeanne Mammen was born in Berlin in 1890 and lived in Paris from the age of five until her mid-twenties. With the outbreak of the First World War in 1914, the French suddenly labeled Mammen’s wealthy merchant father an “enemy alien.” Their possessions seized by the French government, the Mammen family fled to Holland before settling once more in Berlin. Jeanne Mammen’s reduced financial circumstances now compelled her to support herself using the artistic education she had acquired in Paris, Brussels, and Rome. Despite the initial difficulty of earning a living as an artist, Mammen found work as an illustrator for such prominent periodicals as Die Dame, Simplicissimus, Uhu, and Ulk.

In the spring of 1933, the Nazi press denounced Mammen’s artwork as “Jewish” and banned publication of eight lithographs illustrating Peter Louys’s exploration of lesbian love, Les Chansons de Bilitis. Thereafter, Mammen refused to do illustration work for publications that conformed to Nazi standards, and she ceased to exhibit entirely. Between 1933 and 1945, she earned her living selling odds and ends from a cart she pulled through the streets, while also attending local drawing courses. Her output at the close of World War II and from the years that immediately followed attest to the tremendous hardship of life in a city largely devastated by battle.

Although Mammen remained artistically active until her death in 1976, her later works have never achieved the renown of those produced during the Weimar years.

The Galerie St. Etienne began exhibiting Mammen’s work in the 1990s, in connection with a never-realized museum project on female Expressionists.