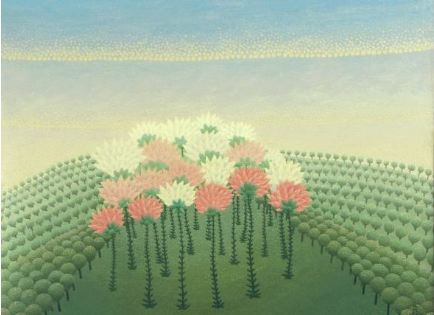 Ivan Rabuzin was born in 1920 in the small town of Kljuc, northeast of Zagreb and in the vicinity of the Hungarian border. He was the sixth of eleven children, whose father worked as a miner to support his family. After completing four years of primary school, the young Ivan started working the family’s small parcel of land with his older brothers.

During the Second World War, Rabuzin studied carpentry in Zagreb and applied his newly developed skills in yet another town, Zenum. Later, after he had started working and was again in Zagreb, he returned to the government trade school to advance his carpentry skills. There, he learned the more skills necessary for a Master Carpenter and those associated with drafting furniture drawings. In the evenings, Rabuzin followed a course that introduced him to drawing in an artistic sphere, as well as to other painters in the area.

Rabuzin’s interest in painting was first piqued in 1944, and he continued to paint whenever he could find the time in his work schedule and increasingly demanding family life. He got married, moved once again to another town and professional position (this time in a furniture factory), and started a family.

In 1956, Rabuzin had his first solo exhibition, which helped to establish his name as a noteworthy painter and further introduced him to his contemporary painters. Although he had little formal training, Rabuzin expanded his knowledge of the artistic world by visiting galleries and reading literature on various artists. He described himself as ignorant about how to paint; however, this naïveté did not stop him, and he continued to develop. Rabuzin’s unique style crystallized in the late 1950s and early 1960s, during which time his work was introduced to the world art market. He was given solo shows in Paris and Sao Paolo. In 1962, Rabuzin began to paint as a professional, and he has continued to do so, gaining acclaim over the years.