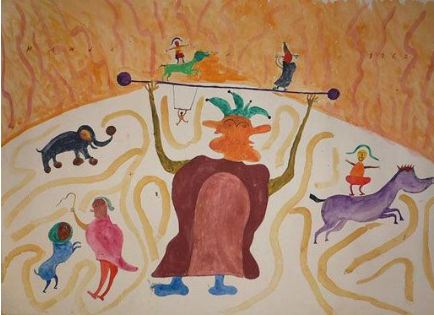 Ilija Basicevic (who later adopted the surname Bosilj as an artistic pseudonym) was born in the town of Sid (now in Serbia and Montenegro) in 1895. Because his peasant family could not do without his assistance on their farm, Basicevic received only four years of elementary schooling. He insisted that his own two sons, Dimitrije and Vojin, receive full academic educations—a luxury that at the time, was almost unheard of among the peasant class. Vojin would become a physician and Dimitrije (much to his father’s dismay) an art historian and critic.

In the 1950s, a “naive” art renaissance swept through Yugoslavia and spread into other Communist countries. Many of the foremost artists of this vogue were Croatian peasants from the town of Hlebine, nurtured by the trained artist Krsto Hegedušić. Dimitrije Basicevic’s early support for one the Hlebine artist Ivan Generalić gave his father, now 62 years old, unemployed, and down on his luck, the idea of painting. Ilija’s earliest works lacked precision and refinement. Dimitrije disapproved, going so far as to destroy some. The longer he looked at his father’s art, however, the more he became convinced of its quality. Ilija drew on extremely personal aesthetic resources, and his work is extraordinary precisely because of its idiosyncrasy. His subject matter was not derived from observable reality, but rather, from his own visions and dreams, along with the largely oral traditions of Serbian folk poetry, myth and history.

Ilija Bosilj had his first one-man show in Belgrade in 1963. Hegedušić (who was feuding with Dimitrije Basicevic) promptly denounced the artist as a fraud, but Bosilj’s work was received to great acclaim. From the 1960s through the 1980s, Bosilj exhibited numerous times in the Yugoslav capitals of Zagreb and Belgrade, as well as in Amsterdam, Basel, Bucharest, Dortmund, Düsseldorf, Munich, Paris and Rotterdam. He was also championed by the two leading scholars of European naive art, Anatole Jakovsky and Oto Bihalji-Merin. In 1971, Sid established the Museum of Naive Art—Ilijanum to honor the work of its native son.

Though Ilija’s international exposure was limited by the civil war that led to the Yugoslavia’s dismemberment following the fall of Communism, his work figured prominently in Charlotte Zander’s Museum of Naïve Art in Bönnigheim, Germany (now Sammlung Zander), and may also be found in the permanent collection of the Centre Georges Pompidou in Paris, France. The Galerie St. Etienne hosted the artist’s first American exhibition in 2006.