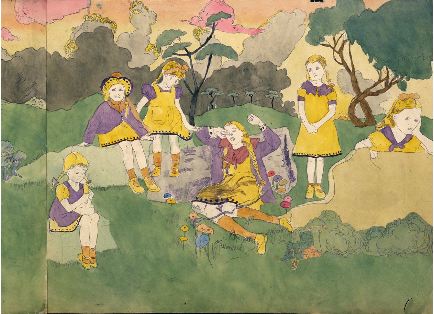 Henry Darger (1892-1973) is in many respects the prototypical “outsider” artist: a recluse who created a startling imaginary world in his rented room, unbeknownst to anyone but himself. Between approximately 1910 and 1921, Darger wrote what is considered the longest novel in existence, The Story of the Vivian Girls in What is Known as the Realms of the Unreal or the Glandelinian War Storm or the Glandico-Abbiennian Wars, as Caused by the Child Slave Rebellion. Spanning fifteen volumes and 15,145 pages, this saga documents a protracted war between an empire of atheistic, child-slave-owning “Glandelinians” and the “Christian nations,” led by the angelic Vivian sisters. Upon completion of the manuscript, Darger devoted the remainder of his life to its illustration, in all, producing several hundred mural-sized watercolors. From disparate visual elements culled from items he obsessively accumulated—newspapers, fashion advertisements, coloring books, rubber stamps—the artist synthesized a complex pictorial narrative of suppressed sexuality, graphic violence and improbable idealism.

Darger’s artistic legacy, discovered shortly before his death by his landlord, Nathan Lerner, gradually won a devoted following. Darger’s insertion of innocent-looking children into grisly battle scenes, and his tendency to endow these children (regardless of sex) with visible penises, unwittingly exposed the faux naiveté of mid-20th century American popular culture. This aspect of his work has particularly resonated with contemporary audiences, accustomed as they are to such postmodern techniques as appropriation and recontextualization. Although some might be inclined to view Darger’s work ironically, the artist’s seriousness of intent is evident. The war between the Abbiennians and the Glandelinians, a struggle between good and evil, at once reflects the dueling forces Darger sensed within himself and mirrors the destructive course of modern history.

Henry Darger ranks among the most widely admired “outsider” artists, and one whose appeal extends beyond the limited circle of folk-art devotees. He has been extensively exhibited not only at specialized institutions such as New York’s American Folk Art Museum (which houses a study center devoted to his work), and the Musée de l’Art Brut in Lausanne, Switzerland (whose large Darger collection is on permanent view), but also at mainstream contemporary museums such as PS 1 in Long Island City. The Galerie St. Etienne represented the Darger estate from 1998–2004, and mounted one-person exhibitions in 1999 and 2004.