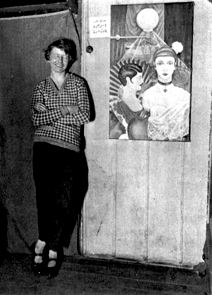 Grethe Jürgens, the daughter of a school teacher, was born in Holzhausen near Osnabrück in northern Germany and brought up in Wilhelmshaven on the North Sea. In 1919, she went to the Hannover School for Artisans and Crafts for three years. Probably under the influence of their revered teacher, Fritz Burger-Mühlfeld, she and fellow-students Gerta Overbeck, Erich Wegner, Ernst Thoms and others formed a closely-knit, politically left-wing and generally anti-establishment group. When Jürgens had to quit the school due to the economic hardships of the period, Burger-Mühlfeld referred her to the Hackethal Wire and Cable plant as a commercial artist. For six years, she designed advertisements; she also did illustrations for the trade magazine Der Manufakturist and illustrated books and articles by writer and close friend, Gustav Schenk.

In 1931, Jürgens, Overbeck, Thoms and Wegner founded the short-lived publication Der Wachsbogen (The Wax Sheet, named for the inexpensive printing process of mimeographing, which was used in its production). The magazine, on which Jürgens served as editor and distributor (mostly by bicycle), was a forum not only for artists but for musicians, architects and writers (among them Schenk) to express their ideas concerning the Neue Sachlichkeit (New Objectivity), which they espoused in opposition to the prior or current trends of Expressionism, Surrealism and Abstraction. In one of the articles she wrote for Der Wachsbogen, Jürgens explained the philosophy of her art: by painting pots, rubbish heaps, common objects, workers, mothers, children, prostitutes, beggars or tramps in houses, vehicles or landscapes, she was not aiming to depict "interesting types" or to appeal to a social conscience. Rather, she found in all these subjects the strongest expression of her surroundings and her times. The human face was preeminent in her art; landscape and cityscape received less attention. However, in the early 1950s, Jürgens abandoned her credo and turned to creating a body of abstract drawings.

Jürgens participated in many exhibitions, starting in 1932, had one-woman shows in 1933, 1935, and at the prominent Wilhelm-Busch-Museum in Hanover in 1951. After 1961, her works were included in most shows featuring Neue Sachlichkeit art. She remained in Hannover all her life.