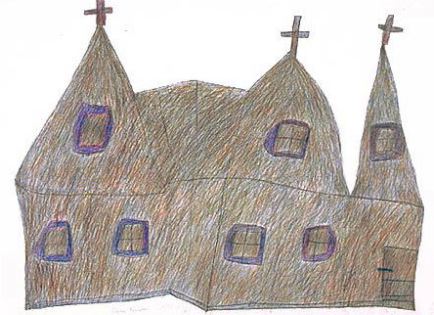 Franz Kernbeis is among the artists associated with the Gugging group. "Gugging" is the abbreviated way of referring to the Haus der Künstler (House of Artists) established in 1981 by the psychiatrist Leo Navratil at the Lower Austrian Psychiatric Hospital in the hamlet of Gugging, outside Vienna. Many years earlier, Navratil had noticed that the art produced by certain of his patients far transcended the qualitative parameters of traditional art therapy. These artists, selected by Navratil with advice from local museum officials and artists (including the well-known painter Arnulf Rainer), began to publicly exhibit in the 1970s.

Franz Kernbeis began drawing in the 1970s. He characteristically applies layers of colored pencil with extreme pressure to achieve an effect of solidity and depth. Since 1983, he has exhibited his extensively worked drawings in museums and galleries worldwide, including the Museum of Modern Art in Vienna, the Austrian Cultural Institute in New York, and the Neues Museum Weserburg, Bremen.