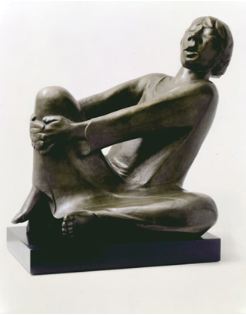 Ernst Barlach defies easy classification: he is both a predecessor to and contemporary of the German Expressionists. Because he worked chiefly in the mediums of printmaking and sculpture, he failed to achieve the widespread recognition of painters such as Kandinsky or Kirchner. Owing to his multitude of talents, his influence was nevertheless extensive. An accomplished writer and dramatist as well as visual artist, Barlach—who, like many in the Expressionist movement, sought to interrogate the human condition through multidisciplinary “total artworks”—produced print portfolios illustrating various literary works, among them some of his own authorship. It was he who pioneered the woodcut revival that would profoundly impact his slightly younger Expressionist colleagues, as well as Käthe Kollwitz.

Born in Wedel, Barlach took up formal study of art in Hamburg in 1888, and also received training in Paris, Dresden and Berlin. While his earliest works were influenced by Art Nouveau, a 1906 trip to Russia set him on the path towards Expressionism. Hereafter, he often depicted Russian beggars and farmers, symbolizing the difficulty of human existence. In 1907, Barlach signed a contract with Galerie Paul Cassirer in Berlin, and in 1912, he exhibited a group of twenty woodcuts there. That same year also saw the publication of his first play.

Barlach initially supported Germany’s position during World War I and served two months in the infantry. After his discharge, however, his new sculptures and prints were imbued with anti-war sentiment. During the Weimar period, these works were favorably received by the German public, and in 1930, Barlach was given a retrospective at the Prussian Academy of Art and participated in the Venice Biennale.

His effective apoliticism notwithstanding, Barlach suffered greatly under National Socialism. The new regime saw in his pacifist, humanist images people of “inferior” races, and consequently accused the artist himself of being “alien,” “Eastern,” “Jewish.” Between 1932 and 1936, his windows were smashed, his mail censored, his works removed from public spaces and major German museums, and finally, he was forbidden to exhibit. Nonetheless, he remained in Germany. Shortly after one of his bronzes and a book of fifty-six reproductions of his drawings appeared in the “Degenerate Art” propaganda exhibition of 1937, Barlach’s health began to decline. He died a year later, in October 1938.