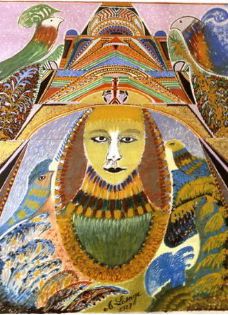 In 1911, a voice spoke to thirty-five-year-old coal miner Augustin Lesage, telling him he would become an artist. Over the ensuing few years, Lesage proved himself quite gifted as a medium, and his career as an artist commenced shortly thereafter. He produced his first drawings during a series of séances, guided by voices of the dead—among them, that of his younger sister, Marie, who had died at three years of age during Lesage’s childhood.

Lesage’s first foray into painting soon followed: throughout 1912 and 1913, the artist spent his leisure time working at a monumental canvas nailed to a wall in his house. His service in the First World War interrupted his artistic pursuits, but he was able to resume his work in 1916. By 1923, Lesage was able to support himself exclusively with his spiritualistic and artistic efforts. At the time of his death in 1954, his body of work consisted of some eight hundred paintings. His finely-detailed compositions most frequently depict highly symmetrical imaginary architectural structures.