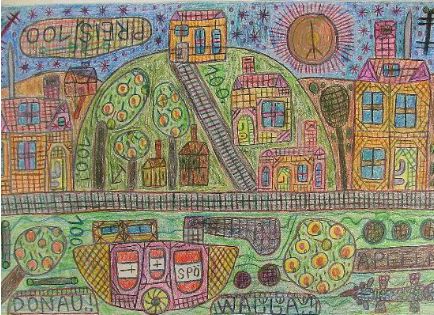 August Walla is among the artists associated with the Gugging group. "Gugging" is the abbreviated way of referring to the Haus der Künstler (House of Artists) established in 1981 by the psychiatrist Leo Navratil at the Lower Austrian Psychiatric Hospital in the hamlet of Gugging, outside Vienna. Many years earlier, Navratil had noticed that the art produced by certain of his patients far transcended the qualitative parameters of traditional art therapy. These artists, selected by Navratil with advice from local museum officials and artists (including the well-known painter Arnulf Rainer), began to publicly exhibit in the 1970s. Gradually, the Haus der Künstler was supplemented by other facilities on the hospital grounds, including a studio, lecture hall, sales gallery, gift shop and museum. Today, under the leadership of the psychiatrist and artist Johann Feilacher, this complex functions under the name Art/Brut Center Gugging. The Lower Austrian Psychiatric Hospital was closed in 2007 and replaced by the Institute of Science and Technology Austria, an international research center.

August Walla was one of the few Gugging artists who painted before coming to live at the Haus der Künstler. He created an extensive body of work including drawings, prints, photographs and paintings. Walla used deeply rich and symbolic imagery to create a world exploring personal, political, cultural and religious issues. Since the early 1970s, his work has been exhibited at venues worldwide, including the Los Angeles County Museum of Art, the Setagaya Art Museum, Tokyo, and the Museum of Modern Art in Vienna.