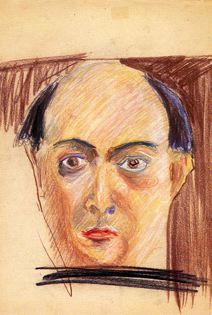 Best known as the originator of a groundbreaking twelve-tone technique for musical composition, Arnold Schoenberg began to explore painting around 1907. Although Schoenberg was largely self-taught as an artist, his brief acquaintance with the young expressionist painter Richard Gerstl (cut short by Gerstl’s dalliance with his wife, and subsequent suicide) proved highly influential.

Like Gerstl, Schoenberg emphasized emotion over beauty in his pictures, but his works are characterized by their own idiosyncratic pictorial language. Each of these “gazes” and “visions,” as Schoenberg called them, expresses some aspect of his inner state. Schoenberg’s period of greatest activity as an artist was in the years 1908-1912. He exhibited at the Heller Gallery in Vienna in 1910, and his work was included in the first exhibition of the expressionist group Der Blaue Reiter at Munich’s Thannhauser Gallery. Despite the interest in his work, Schoenberg all but discontinued his painterly pursuits after 1912.

Arnold Schoenberg lived between Vienna and Berlin from 1901 to 1933, at which point his Jewish faith made him a target for the Nazis. Dismissed from his post as director of a master class in musical composition at the Berlin Arts Academy, he left Europe altogether, settling in Los Angeles, California. Schoenberg was named a professor at UCLA, and continued to teach, write, and compose until his death in 1951.

In 1945, Otto Kallir invited Schoenberg to exhibit some of his paintings at the Galerie St. Etienne. Though an enthusiastic correspondence between the two men continued for some months, nothing ever came of the plan. Schoenberg’s sixty-odd paintings were relegated to an uneasy limbo somewhere between biographical quirk and true art after his death, and exhibited sporadically in university settings or in conjunction with concerts of his music. This body of work finally received a comprehensive showing at Galerie St. Etienne in late 1984, with Arnold Schoenberg’s Vienna. Since then, Schoenberg’s paintings have been widely recognized as an important contribution to the history of Expressionism.