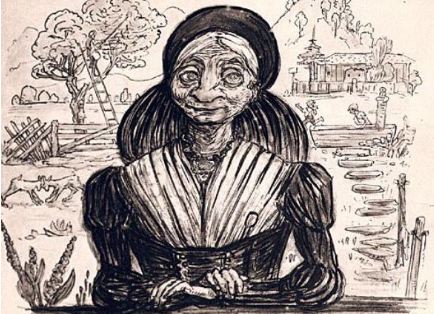 The first twenty years of Alfred Kubin’s life were largely unhappy, punctuated by the untimely death of his mother, a suicide attempt at nineteen, and a complete mental and physical collapse in 1897. Once recovered, Kubin was sent to Munich to study art, a longtime avocation for which he had shown some talent. In Germany, his nightmarish depictions of fantastical creatures inhabiting shadowy realms quickly propelled him to prominence. By 1911, he had exhibited at Berlin’s Galerie Paul Cassirer and with the Vienna and Berlin Secessions. He was also associated with the Phalanx Group (and through it, with Wassily Kandinsky’s Expressionist circle), the Neuekünstlervereinigung, and the Blaue Reiter group.

Even during this period of productivity and artistic achievement, Kubin was pursued by tragedy. He endured the loss of a fiancée to typhus and the death of his father, and witnessed his chronically-ill wife’s descent into morphine addiction. Thrust again into spiritual and emotional crisis, Kubin turned to writing, producing the allegorical novel The Other Side. The illustrations for the proto-Expressionistic text, which took just twelve weeks to complete, introduced a more realistic style that would, with minor modifications, characterize Kubin’s work for the remainder of his career. Frenetic pen-strokes, sometimes livened with touches of watercolor, replaced the misty “spray technique” of former years.

By the 1920s Kubin was well established professionally, though his activity had slowed after the First World War. He enjoyed a lucrative career as a printmaker and book illustrator, showed with such major German dealers as Hans Goltz, Fritz Gurlitt, and J.B. Neumann, and in Vienna, was represented by Otto Kallir’s Neue Galerie. Despite Kubin’s prolific correspondence with numerous far-flung friends, the artist led an essentially reclusive existence. When the Nazis marched into Austria in 1938, he was taken completely by surprise, for he neither owned a radio nor read newspapers.

Kubin’s isolation enabled him to live out the Nazi years relatively undisturbed. Unlike some banned German colleagues, he did not have to go into “inner exile,” because he was effectively already there. He could continue to exhibit, though there was little demand for his quirky drawings in Hitler’s Reich. Once the war ended, Kubin’s native Austria hailed him as a national treasure, honoring him with a retrospective in Vienna and the establishment of a “Kubin Kabinett” at the Neue Galerie in Linz. Similar accolades followed until his death in 1959.