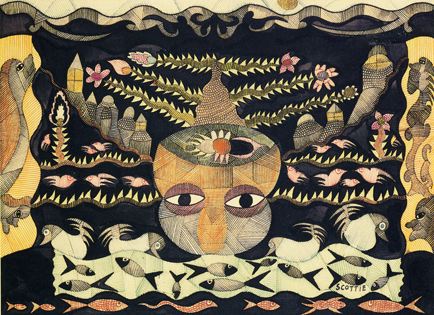 One of three sons of Lithuanian immigrants, Scottie Wilson (born Louis Freeman), grew up in Glasgow and learned survival skills early in life. He left school at age eight and helped support his impoverished family by selling anything from newspapers to patent medicines on the streets. In 1906, he enlisted with the Scottish Rifles and was posted in India and South Africa. During World War I, he fought on the Western Front, and at the end of the war immigrated to Toronto, where he owned and operated a secondhand shop.

At some point in the 1920’s or 1930’s, Wilson began doodling with one of the fountain pens that he collected for their gold nibs. From that moment on, he created fanciful drawings embodying a personal code of morality wherein characters called “evils” and “greedies” are juxtaposed with naturalistic symbols of goodness and truth. The first dealer to encounter Wilson’s work was a Canadian, Douglas Duncan. While the artist did not want to part with his drawings, he found the idea of an artistic career preferable to shopkeeping.

Wilson returned to Britain in 1945, moving to London, and exhibited drawings for modest fees. Though he was mistrustful of dealers, he was persuaded to exhibit his work in London galleries, and he was included in the “Surrealist Diversity” exhibition at the Arcade Gallery in 1945. Though he always complained of poverty, Wilson was discovered at the time of his death to have secreted a suitcase full of money under his bed and to have deposited large sums in various bank accounts.