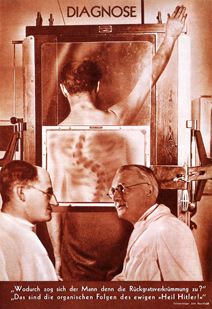 Helmut Franz Josef Herzefelde was born in Berlin-Schmargendorf. At the age of five Hezerfelde's father, a socialist writer, moved the family to a small town near Salzburg, Austria. The Herzefelde children were abandoned there by their parents in 1899. Shortly after, Helmut went to live in Wiesbaden with his older brother Wieland. After a brief apprenticeship with a book dealer in Wiesbaden, Herzefelde studied advertising and graphic design at the Munich School of Arts and Crafts. He left school in 1911 and worked as a commercial designer for a year. Herzefelde managed to avoid protracted military service in World War I by feigning a mental breakdown. After his release from the army in 1915, he returned to Berlin, a city he had called home since 1913.

In Berlin, Herzefelde met Georg Grosz and was so impressed by Grosz's artistic efforts that he destroyed all of his own prior work. In an attempt to express their anti-war sentiments and disdain for the German government, the two men decided to anglicize their names: Herzefelde became John Heartfield, and Georg Grosz became George Grosz. Although initially concentrating on furthering the publication of Grosz's work and that of other subversive political artists, Heartfield soon returned to creating his own art. Along with Wieland Herzefelde, Grosz and Heartfield founded Neue Jugend, a publication featuring political satire, which was quickly banned by the government. In a reaction to this ban, the two brothers founded the Malik-Verlag publishing company in 1917, which continued to publish the work of socialist authors throughout the Weimar period. In 1918, Heartfield assisted in forming Berlin's Club Dada, and at this time began to take interest in photomontage as a means to communicate with the masses, perhaps inspired by the Dada style of "paste-up" typography, which appeared on posters and fliers. Heartfield continued to work in photomontage for the rest of his life.

Heartfield officially became a member of the German Communist Party (KPD) in 1918, and began working for their journal in 1923. He eventually became the secretary of the Rote Gruppe, an association of radical political artists, as well as a member of the Working Cooperative of Communist Artists, and a collaborator at the KPD's Studio for Graphics. In 1930, the Arbeiter Illlustrierte Zeitung (AIZ) began featuring Heartfield's political photomontages, and his association with this periodical lasted until 1938. Following a year-long trip to the U.S.S.R., Heartfield was forced to emigrate to Prague in 1933 for fear of persecution by the Nazi government and, eventually, to London in 1938. Although the Nazis revoked his citizenship in 1934, Heartfield continued to work for AIZ and the Malik Verlag. While Great Britain banned his participation in political activity, he was allowed to exhibit, and he contributed to several British publications.

Heartfield returned to Germany in 1950, residing briefly in Leipzig but settling finally in East Berlin. He was honored in 1956 by being elected to the East German National Academy of the Arts, and the title of Professor was bestowed upon him in 1960.