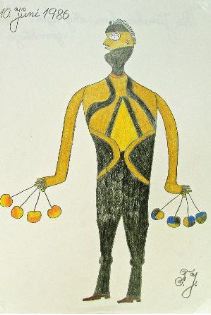 Johann Fischer is among the artists associated with the Gugging group. "Gugging" is the abbreviated way of referring to the Haus der Künstler (House of Artists) established in 1981 by the psychiatrist Leo Navratil at the Lower Austrian Psychiatric Hospital in the hamlet of Gugging, outside Vienna. Many years earlier, Navratil had noticed that the art produced by certain of his patients far transcended the qualitative parameters of traditional art therapy. These artists, selected by Navratil with advice from local museum officials and artists (including the well-known painter Arnulf Rainer), began to publicly exhibit in the 1970s. Gradually, the Haus der Künstler was supplemented by other facilities on the hospital grounds, including a studio, lecture hall, sales gallery, gift shop and museum. Today, under the leadership of the psychiatrist and artist Johann Feilacher, this complex functions under the name Art/Brut Center Gugging. The Lower Austrian Psychiatric Hospital was closed in 2007 and replaced by the Institute of Science and Technology Austria, an international research center.

Predating the recent fad for "outsider" art, the Gugging colony has exhibited throughout Europe, the United States and Japan, and is widely recognized for its pioneering integrity and quality. Johann Fischer began drawing in 1981 at the Haus der Künstler in Gugging. Working in pen, pencil and crayon, he first exhibited two years later at the Museum of Modern Art in Vienna. These early works, depicting single objects or figures, evolved into elaborate narrative combinations of text and visual imagery that impart both a story and the artist's personal observations. Fischer has shown extensively throughout Europe, in Berlin, Lausanne, Vienna, and other cities, as well as in the United States. His works are found in private and museum collections worldwide.