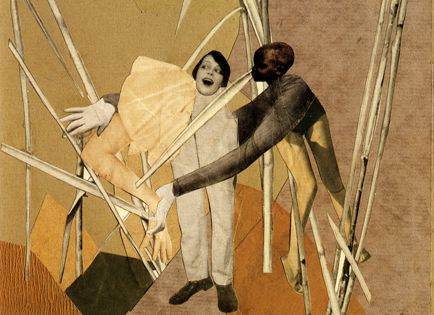 Born in Gotha, Germany, Hanna Höch studied at the Kunstgewerbeschule in Berlin with Harold Bengen and at the State Museum of Applied Arts with Emil Orlik. In 1915, she met Conrad Felixmüller at the home of Ludwig Meidner and learned of his plans to form a Dresden Secession. That same year she met Raul Hausmann with whom she was romantically involved until 1922.

In 1917, Höch and Hausmann joined the Berlin Dada circle. The Dadaists attacked Expressionism for its abstraction, subjectivity and lack of engagement with politics. They called for art forms that were involved with the critical issues of the day and would appeal to the working classes. The Dadaists believed in the power of creative shock; they felt that their art should jolt the viewer out of complacency in order to stimulate change. To this end, Höch and Hausmann began using avant-garde photomontage (with photos taken from popular magazines) to critique contemporary social and political conditions. In 1919, Höch participated in the First Berlin Dada Exhibition along with Raul Hausmann and George Grosz. In 1920, she participated in the First International Dada Fair in Berlin, and her work was published in the Dada-Almanach.

Höch joined the Novembergruppe in 1919, shortly after its inception, and exhibited with them until 1931. Nonetheless, in 1921 she joined Grosz, Heartfield, Dix, Schlichter and other Dada artists in publicly accusing the Novembergruppe of betraying its political origins by endeavoring to found a Saxon-Weimar Academy. The protesters felt an Academy was elitist and undermined their “revolutionary longing for a sense of community and a relationship with the working masses outside of the tactics and maneuvering of snobbish art clubs and dealer speculation.”

In 1922, Höch separated from Hausmann, though not from the Dada circle. She worked with Kurt and Helma Schwitters on the 1922 and 1925 Merzbau in Hanover and on the 1924 “Anti-Revue.” In 1924, Höch met Mondrian and Tzara in Paris and participated in the “General German Art Exhibition” in the Soviet Union. Two years later, she moved to the Netherlands, where she was in close contact with the De Stijl group. She had her first one person exhibition in the Netherlands in 1929 and was included in the 1929 Stuttgart Film und Foto exhibition.

In 1931, Höch took part in the Berlin Fotomontage exhibition, as well as the Berlin “Women in Need” exhibition to protest the anti-abortion statute #218. Her 1932 exhibition at the Dessau Bauhaus was cancelled when the school was closed by the Nazis. Höch withdrew from the art world in 1937 and did not exhibit again until 1945.