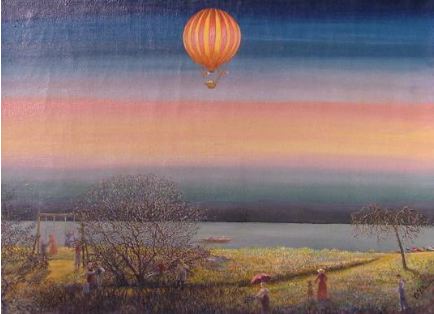 An anemic pianist from Evanston, Illinois, Gertrude McBrady arrived in Paris in 1938, when her fragile health interrupted a voyage to Spain. While convalescing in Paris, McBrady changed her name to O’Brady, finding it less difficult for the French to pronounce. An art critic with whom O’Brady went on a date presented her with a set of paints as a joke, and although the flummoxed O’Brady had never studied art and was uncertain of what to paint, she did come to embrace painting, rapidly shifting from never having produced a single picture to sometimes working for twelve or more hours per day. Within two years, the newly-minted artist had created nearly sixty artworks.

By the time of O’Brady’s 1949 Manhattan exhibition, the artist’s paintings had lost their surrealist trappings, and instead offered tightly-painted, highly detailed views of Paris. Inside a decade, O’Brady had undergone a series of transitions, with critics drawing stylistic parallels between her earliest works and Rousseau’s oeuvre, and comparing her pencil drawings to works by the fifteenth-century artist Jean Fouquet. Sometime in the 1950s, however, O’Brady gave up painting altogether, and, according to Anatole Jakovsky, eventually moved to Italy. She may have suffered a breakdown, though little is known about the remainder of her life.