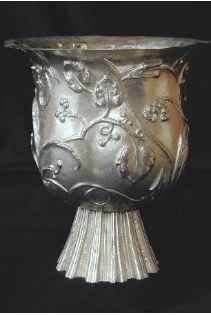 Trained in mechanical engineering at the Viennese Technical Institute and in architecture at the Academy of Fine Arts, Dagobert Peche launched his career by designing china and carpets for mass production. He began doing freelance work for the Wiener Werkstätte in 1911, and in 1915 he took a position there as Director of the Artists’ Workshops. Under his leadership, the Wiener Werkstätte’s designs became more decorative and free-spirited. Peche’s animated, asymmetrical, organic style was particularly appealing to his female colleagues, who filled the places of men who had gone off to fight in World War I. Conscripted himself in early 1916, Peche served briefly, although not at the front. In 1917, he was named Director of the Wiener Werkstätte. Following his release from the army, he moved to Zurich with his family to establish a Werkstätte branch there. He returned to Vienna in 1919.

Peche’s rococo tendencies were in sharp contrast to the geometric linearity that had characterized the designs of the Werkstätte’s founders, Josef Hoffmann and Koloman Moser, before the war. But, in keeping with the founders’ philosophy, Peche favored handicraft over machine production (which exerted a much stronger pull at the Bauhaus). Like Hoffmann and Moser, Peche was adept at working with a wide range of materials. He designed bobbin and tulle lace, china, bookbindings, fashions, textiles, furniture, lighting fixtures, wallpaper, Christmas-tree decorations and jewelry. Peche’s jewelry designs were rendered in ivory and tortoiseshell by sculptors specially hired for that purpose. He also established a silver and metal workshop to produce jewelry and other precious articles.

Peche was one of the Wiener Werkstätte’s most creative members, designing some 3000 objects in the period from 1915 to his death in 1923.