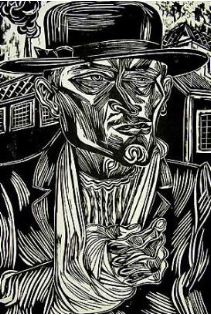 Born in Dresden, Felixmüller studied music in his youth, but switched to fine art in 1911. In 1912, he was admitted to the Dresden Academy, and in 1914 he joined the Dresden Secession. The next year, Felixmüller traveled to Berlin, where he met Hannah Höch, Wieland Herzfelde, Ludwig Meidner and Raul Hausmann, and exhibited at Der Sturm gallery. In 1916, he began contributing to the political periodical Die Aktion, and in 1917 he co-founded the periodical Menschen. During the First World War, Felixmüller served in the military as a nurse's aid.

Felixmüller joined the Communist party after the war (until 1926) and began exhibiting with the Freie Sezession in Berlin. In 1919, he founded the Dresdner Sezession-Gruppe 19 and joined the Novembergruppe. That same year he withdrew from the Dresdner Sezession as the group could not reach a consensus on a political-artistic program. During the Weimar years, Felixmüller exhibited and taught continually. He was elected president of the Saxon Union of Visual Artists and secretary of the National Union of Visual Artists. He was also awarded the Saxon State Prize for painting (Dresden) in 1920, the Grand Prize for painting (Dresden) in 1928 and the Grand Prize for painting and the Dürer Stipend (Nuremberg) in 1931.

In 1933, forty pieces by Felixmüller were included in the Nazi exhibition "Reflections of Decay" at the Municipal Museum in Dresden. Seven of his works were included in the "Degenerate Art" exhibition in 1937, and 141 of his works were removed from public collections. In 1944, his studio in Berlin was bombed by the Allies. After the Second World War, Felixmüller resumed teaching in Germany.