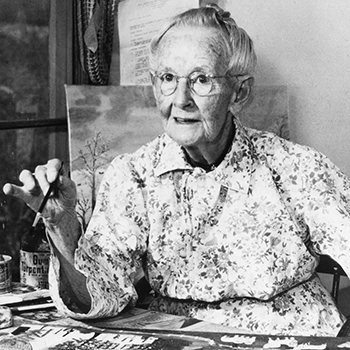 “Memory is a painter. It paints pictures of the past and of the day” –Grandma Moses
Grandma Moses was an early art-star, a true celebrity. As a woman artist who eventually triumphed in the male-dominated art world of the 1940s and ‘50s, she should have been a heroine to feminist art historians, but for the most part, they passed her by. There was nevertheless something almost subversive about the way Moses used feminine stereotypes to fly below the radar, achieving a renown that was denied more conventional female artists of her generation—all after the age of 80. Because Moses blithely embraced the demeaning “Grandma” moniker, she was taken seriously neither by feminists nor by mainstream art critics. The effects of gender, both negative and positive, on Moses’s career, merit further study.

The artist was born Anna Mary Robertson on September 7, 1860, in Greenwich, a small community in upstate New York some thirty miles northwest of Bennington, Vermont. Her father, Russell King Robertson, was a farmer and also operated a flax mill. While Anna Mary’s five brothers helped their father at the mill and on the farm, she and her four sisters were taught to master a variety of domestic duties. At the tender age of twelve, Anna Mary went to work as a “hired girl” on a neighboring farm, helping a wealthier family with household chores. She was to pursue this sort of work for the next fifteen years until, at the age of 27, she met “hired man” Thomas Salmon Moses, whom she married. The pair relocated to Virginia, where they took over a local farm as tenants.

Thomas eventually grew homesick, and in 1905 he persuaded his wife to return North. “I don’t think a bit has changed since we left,” Anna Mary remarked, “the gates are hanging on one hinge since I went away.” She and Thomas bought a farm in Eagle Bridge, not far from her birthplace. They cheekily christened it “Mount Nebo,” after the Biblical mountain where Moses disappeared. It was on this farm, in 1927, that Thomas Moses died of a heart attack.

In 1932, Moses went to Bennington to care for her daughter Anna, who suffered from tuberculosis. It was Anna who showed her mother a picture, embroidered in yarn, and challenged her to duplicate it. Moses then began stitching what she called “worsted” pictures and giving them away to anyone who would have them, until arthritis made it difficult for her to hold a needle. Her sister Celestia suggested she paint instead, and in this casual manner, Moses’s career began.

Grandma Moses made her public debut at the Galerie St. Etienne in October 1940, shortly after her 80th birthday. The gallery’s founder, Otto Kallir, had titled the exhibition “What a Farmwife Painted,” thinking the artist’s name, then completely unknown, did not merit attention. It was only some months later that a journalist, interviewing friends in Eagle Bridge, came upon and then popularized the local nickname “Grandma Moses.”

The events that established Moses as a national and then international celebrity followed in quick succession, in 1944. Kallir and Ala Story (director of the American British Art Center) launched a series of traveling exhibitions that would, over the ensuing two decades, bring Moses’ work to more than thirty American states and ten European nations. In 1946, Kallir edited the first monograph on the artist, Grandma Moses: American Primitive, and oversaw the licensing of the first Moses Christmas cards. In 1949, Moses traveled to Washington to receive a special award from President Truman. The next year, a documentary film on her life, photographed by Erica Anderson, directed by Jerome Hill, and with narration by Archibald MacLeish, was nominated for an Academy Award. Her autobiography,My Life’s History, was published in 1952.

The media seemingly never tired of repeating Moses’s fairy-tale story. In 1953, she was featured on the cover ofTime Magazine; in 1960, Life sent noted photographer Cornell Capa to do a cover story on the artist’s 100th birthday. That birthday–declared “Grandma Moses Day” by New York’s governor, Nelson Rockefeller–was celebrated almost like a holiday in the nation’s press. The fanfare was repeated the following year, when Moses turned 101. Everyone rejoiced at the artist’s longevity. Grandma Moses’s passing, just a few months later, on December 13, 1961, was front-page news throughout America and much of Europe.

The rags-to-riches saga of the elderly painter captured the American imagination. Facing the harsh realities of the Cold-War era, the public took heart in a real-life tale that seemed to prove the old adage, “it’s never too late.” Moses was seen—and to a degree intentionally promoted—as an antidote to abstraction. A public confused not only by modern art, but by the implications of the nuclear age, found solace in Moses’ cheerful, readily comprehensible scenes of rural farm-life. Here the cows would be milked, the crops planted and the hay brought in, from one year to the next, just as spring would follow winter and autumn, summer. Combining stylized representations of nineteenth-century agricultural practices with highly evocative depictions of the surrounding landscape, Moses’s paintings linked the past to the present and, in the process, seemed to guarantee the future.