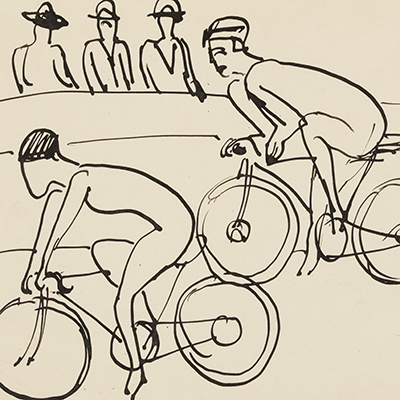 In conjunction with our current exhibition, Ernst Ludwig Kirchner: Featuring Watercolors and Drawings from the Robert Lehman Collection, Eric Fischl shares his thoughts on the art of drawing.

The nature of painting and drawing, and sculpture, as well as photography, is to stop the world. [To] create for the audience, the feeling of something fleeting that people can come and perceive over and over. The object, actually, was forever, but it gave you an experience of evanescence or ephemerality, or something like that.

Color is amassing form and it’s light-filled so you simultaneously get through a gesture, a relatively simple gesture, you can get an essential feeling of a body that’s very physical and real, and also get the luminosity of it, the lightness of it.

One of the fun things to do when looking at drawings is to imagine where on the pencil they’re holding. It gives you a sense of their deliberateness, sensitivity, the heaviness or the lightness of the line. With Klimt, he seemed to almost be holding the feeling of it, not the actual thing. It was almost like he was holding it closer to the top, so it had a kind of a interesting ‘stroking’ quality to it. He was also somebody who never took his eyes off the model. That [hand-eye] coordination, that confidence with which he cold not see what he was doing, and also accept the distortions which were not based on realist observation, but were based on a feeling.

[Egon] Schiele knew from the neck down to the tip of the finger exactly where he was going and was nervous the whole way.

I work from photographs. The photograph slices life so thinly that everybody is off balance. Everybody is in a state of motion and within a narrative structure you need that kind of animation to trigger the whole scene. Photography receives the image, Kirchner goes out and gets it.