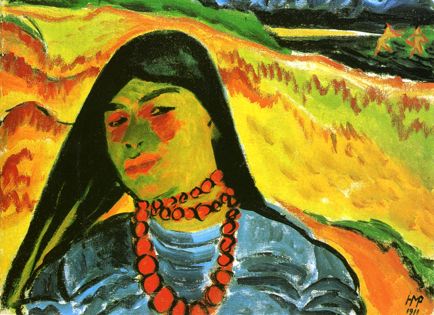 Hermann Max Pechstein was born in Eckersbach (Zwickau), Germany, and moved to Dresden in 1900 to study at its School of Applied Arts and the Royal Academy of Fine. As a painter, he favored nudes and landscapes, his vivid palette heavily influenced by the work of Vincent van Gogh and the French Fauves. Pechstein’s oeuvre also comprises nearly a thousand print works.

At various points before the First World War, he was active within the artist collective Die Brücke, the Berlin Sezession, the Neue Sezession (which he helped to found, along with Georg Tappert), and Der Blaue Reiter. He also published regularly in the art and literary weekly Der Sturm.

Pechstein traveled to the German-occupied Palau Islands in the South Pacific in 1914, but was forced to leave when the Japanese invaded. On his return journey, he was imprisoned by the Japanese at Nagasaki. After his release in 1915, Pechstein traveled through Asia and to the USA. Returning to Germany, he was drafted and sent to the Western Front. He suffered a nervous breakdown, was discharged in 1917, and returned to Berlin.

After the war, Pechstein became one of the most politically active Expressionist artists. In addition to cofounding the Novembergruppe (with César Klein), he supported various artistic and humanitarian organizations, produced posters and illustrations for the publicity office of the provisional government, and contributed writings and illustrations to the socialist press and radical journals. He exhibited widely throughout the 1920s. In 1932 he received the State Prize of the German Government, but in 1933 the Nazis dismissed him from his teaching position at the Berlin Academy, removed upwards of three hundred of his works from public collections, and forbade him to exhibit. Six of Pechstein’s paintings hung in the infamous “Degenerate Art” exhibition of 1937.

During the final years of the Second World War, Pechstein was drafted into a labor detail and held captive in Russia. Upon his release in 1945, he returned to Berlin, where he received a teaching post at its College of Free Arts.