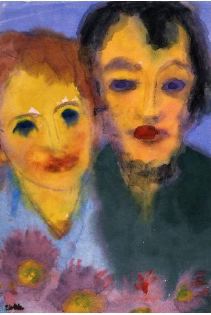 Emil Nolde was born Emil Hansen in the North German village of Nolde, near the Danish border. The son of peasant farmers, he left home at seventeen, apprenticed with a woodcarver, and later designed furniture in Munich, Karlsruhe, and Berlin. By 1894, his focus had shifted from the applied arts to the fine arts. He was briefly affiliated with the artists’ collective Die Brücke and the Berlin Secession, and a founding member of the Neue Sezession. He attained widespread recognition by the 1920s, and is today best remembered as a prolific printmaker, painter, and watercolorist.

In 1901, the artist moved to Copenhagen, where he met and married Ada Vilstrup. He changed his surname to Nolde when he wed, in homage to his birthplace. The Noldes divided their time between Berlin and the North German island of Alsen from about 1905 onward, and Nolde’s artistic subjects reflected the duality of his living arrangements. Seascapes and landscapes were produced on the isolated seashores and moors of North Germany, while his urban scenes depict the cabarets, cafés, nightclubs, and variety theatres he frequented in Berlin. These modern urban settings disappeared altogether from Nolde’s work following his 1913 travels through the South Seas. Hereafter religious subjects, stylized, mask-like portraits, and above all, seascapes and landscapes came to dominate his oeuvre. As he sought to separate himself from outside artistic influences, his pictures approached pure abstraction.

Though he was sympathetic to the Nazi party (having sought membership in the Danish branch), Nolde’s work was at odds with the movement’s aesthetics. With thirty-two of his paintings included in the “Degenerate Art” exhibition of 1937, he was the most prominently represented artist in the show. Nolde penned a letter to Joseph Goebbels in which he aligned himself with Hitler’s nationalistic “blood and soil” mythology, but was nevertheless forbidden to paint beginning in 1941.

After World War II, Nolde received the German Order of Merit (the country’s highest civilian decoration). In 1946, he and his wife established the Ada and Emil Nolde Foundation in Seebüll, transforming their house and beloved gardens, along with the artist’s studio, into a museum.